In further exploring my interest in Bismuth crystals, I wanted to try giving the crystals a designed structure to build off of.  I created a custom “casting chamber” within a block of MDF using the CNC Mill.  I knew from previous experimentation that the MDF would not catch fire if exposed to liquid bismuth.

The casting chamber features a 10 degree slope on which the 3D print sits.  This allows the bismuth to flow over the surface, preventing it from pooling up.  At the top of the chamber is a 20 degree slope for me to pour the metal onto.  I didn’t end up using this and instead poured directly onto the top of the 3D print.  At the bottom of the chamber is a small reservoir for collecting excess bismuth that did not solidify on its way down the slope.  A 1mm tall lip prevents the 3D print from slipping.  A hole drilled all the way through the MDF allows for the use of a pencil to push the 3D print and cast out of the chamber.

The melting point of Bismuth is 520 degrees F.  I heated it from above using a propane blowtorch.

Bismuth Casting Chamber is the second chamber from the right in this image.

Unfortunately the 10 degree slope was too steep and the bismuth moved too quickly to form crystals or oxidize as it moved over the print.  The majority of the bismuth was collected in the reservoir at the bottom of the chamber.  Initially the surface of the bismuth in this reservoir was smooth and flat (as liquids tend to be).  As the metal cooled, crystals slowly pushed their way above the surface. 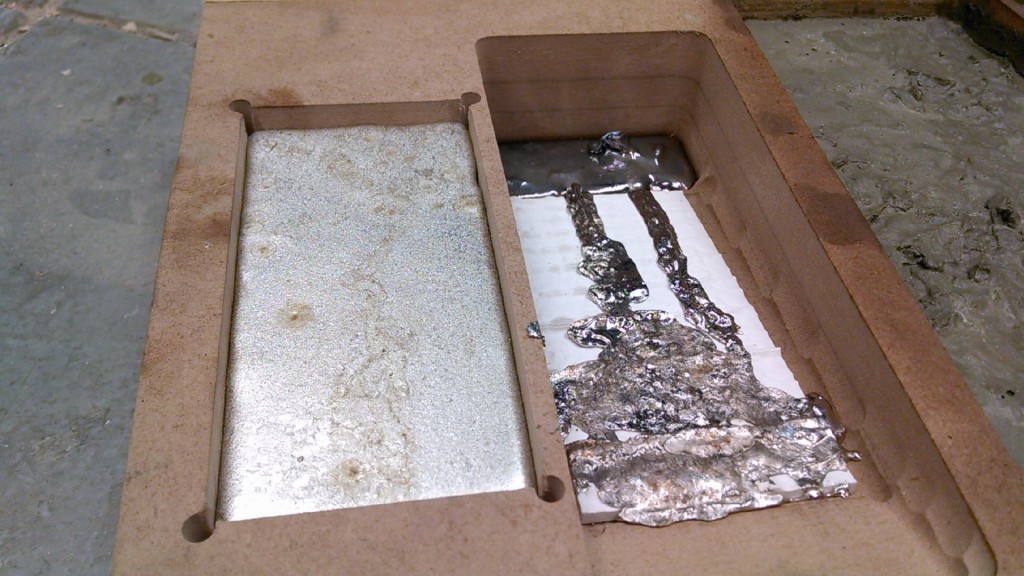 The Bismuth Casting Chamber after casting, on the right. 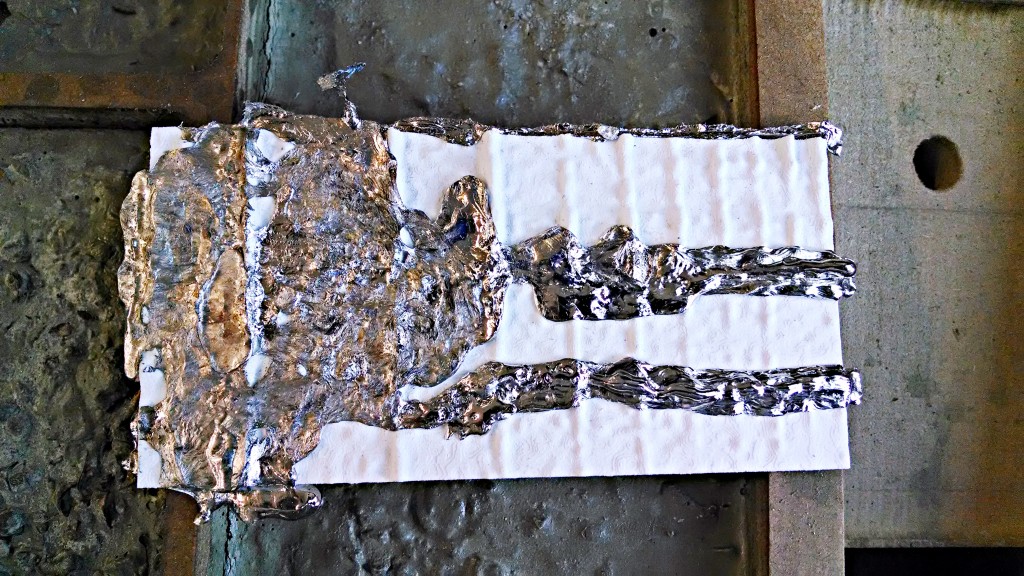 The bismuth that collected in the reservoir.

The bismuth that collected in the reservoir. 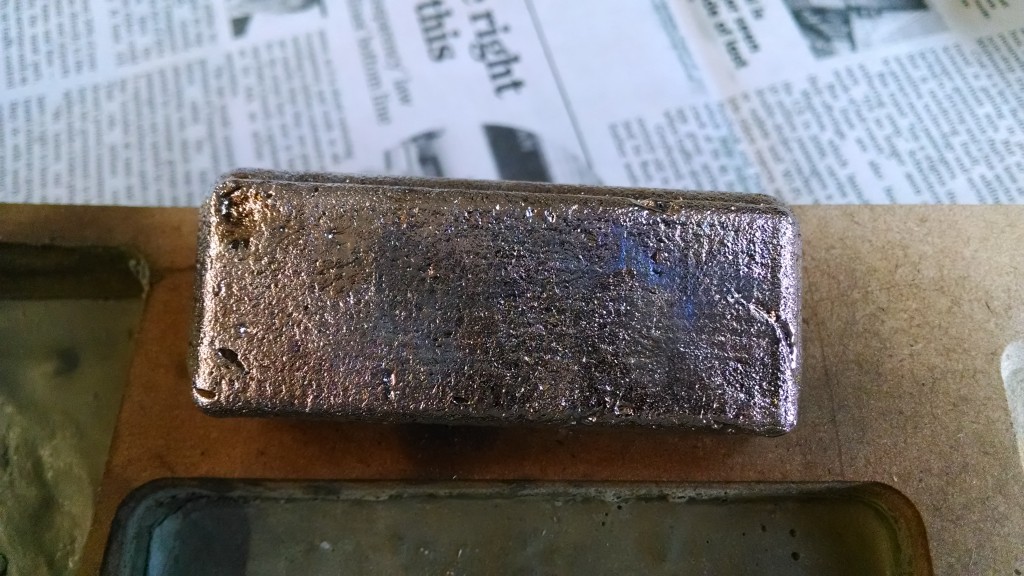 The bismuth that collected in the reservoir. The crosshatched finishing toolpath that I used on the MDF is apparent here. 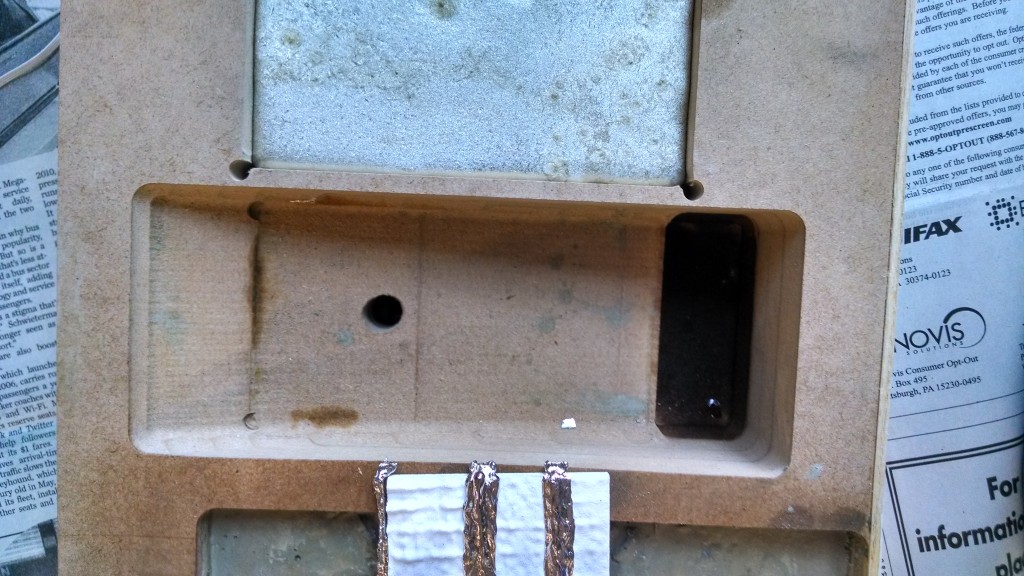 Note that the MDF has burn marks where it was touched by the bismuth. I observed no smoke and no fire seemed imminent. Despite this, the reservoir area is completely blackened.

This cast was much simpler in intent and execution.  I poured the metal over the plaster print and received a direct cast.

The exact alloy of the metal is unknown.  According to the person who gave it to me it likely contains tin and aluminum and some bismuth.  It has a fairly low melting temperature.  The bismuth was likely added to help lower the melting point of the alloy.

I heated the block of metal from above with the blowtorch in the same container that I melted the pure bismuth.  Yes, this added extra bismuth to the alloy in an uncontrolled way.  I was not concerned.  The melting point was noticeably higher than that of bismuth.  It took awhile before any part of the metal even changed form on the surface.  This is likely because the rest of the block needed to be raised in temperature.  Once the entire block reached its melting point, it dissolved into liquid fairly quickly.

The casting chamber is simple.  It fits the plaster print exactly.  The corners were drilled out to ensure that the corners of the plaster print were not damaged during repeated installation and removal.  This chamber also features a hole drilled all the way through so that the print and cast can be pushed out with a pencil.

Pouring the metal presented no issues.  Initially the liquid metal was a reflective as a mirror.  Within about a minute it developed the matte finish depicted in these pictures.  The fast, gradual transition from gloss to matte is seen in the casting video.

I wasn’t sure how viscous the metal would be in its liquid state.  As you can see, it tended to cling to itself and did not allow itself to enter small cracks or even the holes drilled for the corners of the plaster print.  Its too bad because I wanted those artifacts to survive into the final cast.

The cast was too hot to touch for over an hour after pouring. 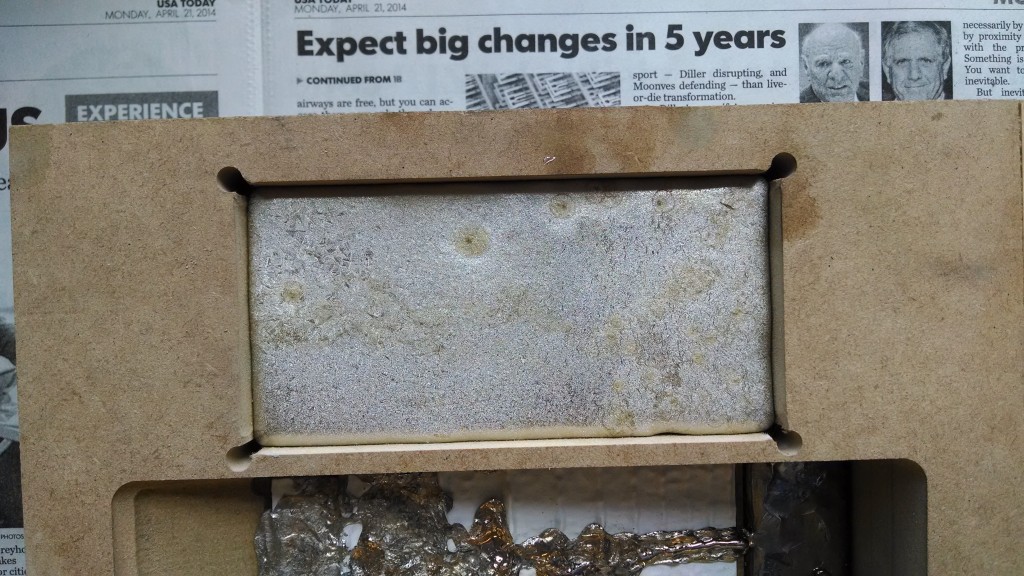 The variations in the surface finish are from the last drips to be poured into the casting chamber. 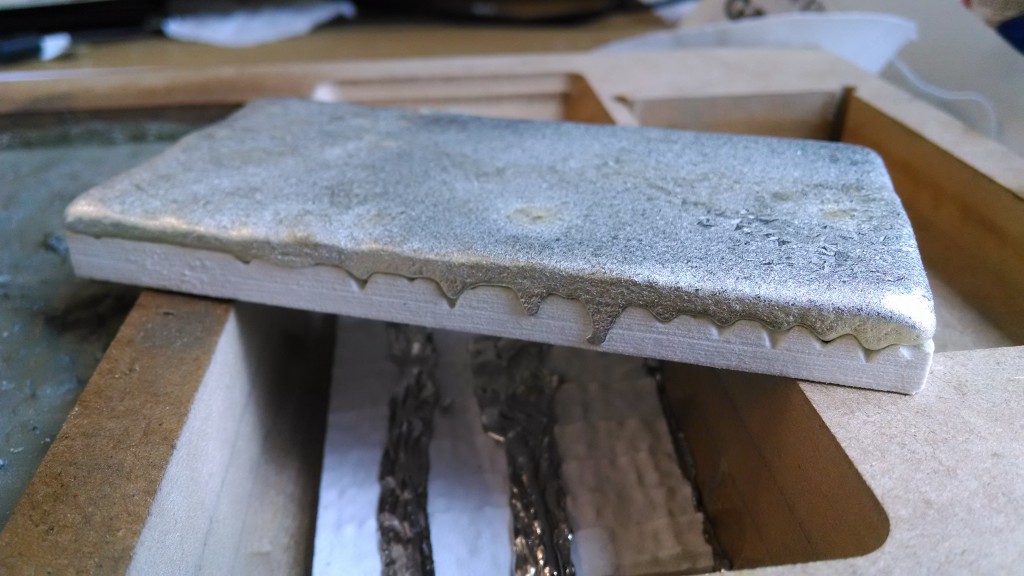 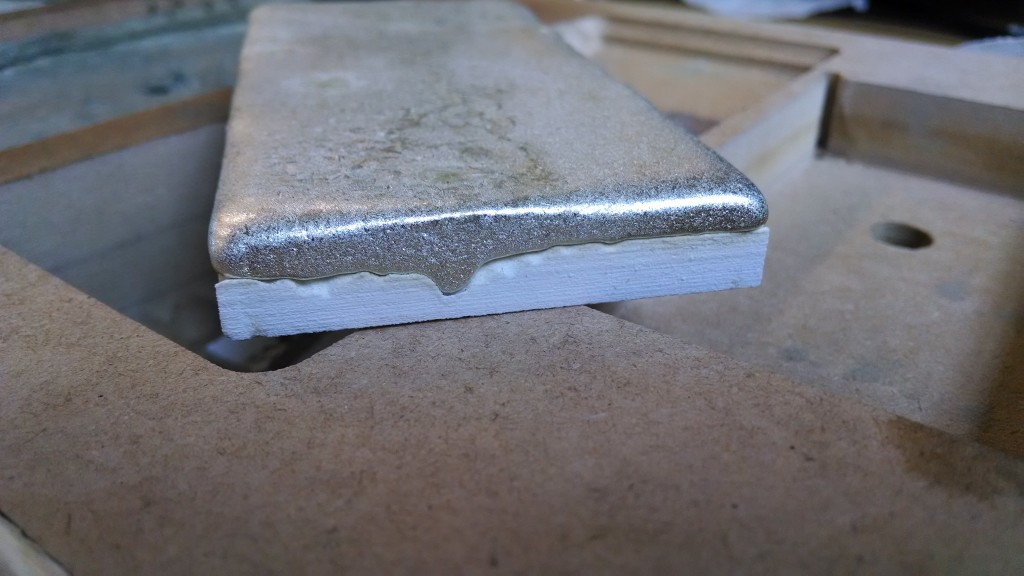 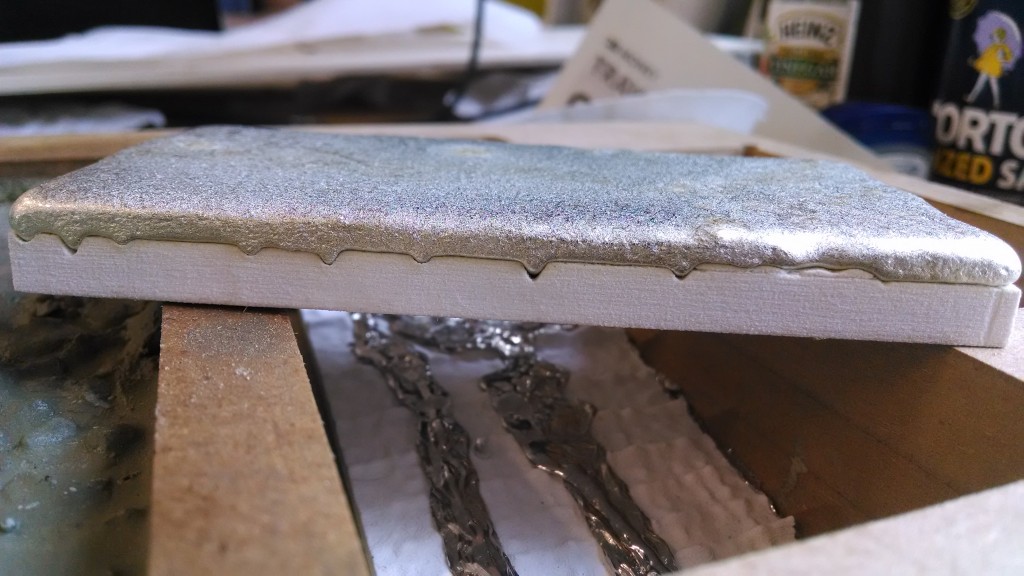 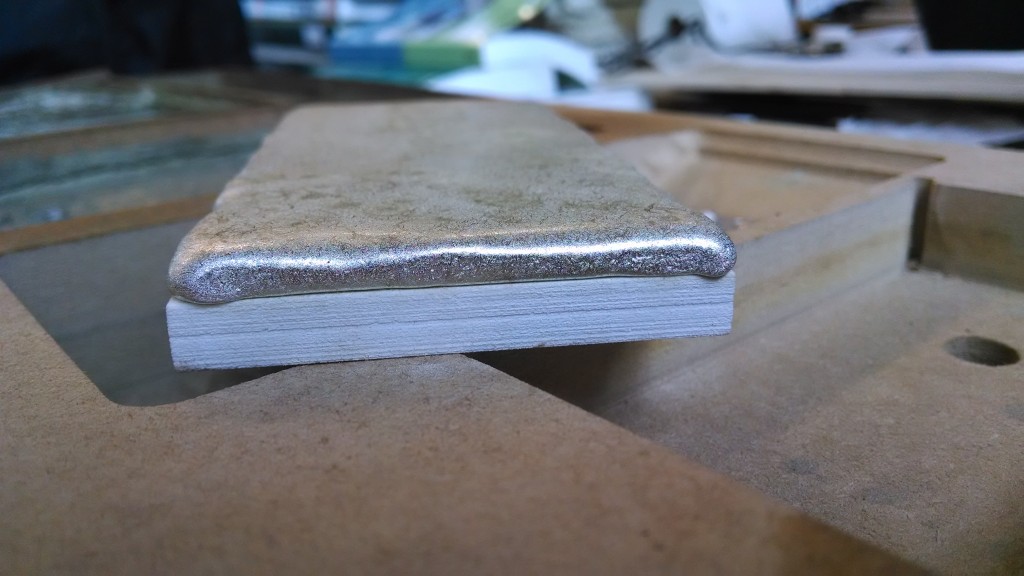 Removing the cast from the casting chamber was very easy using the hole I drilled.

The metal cast clung very tightly to the metal print.  I did not use a mold release because prior experience with metal casting showed that the metal wanted to stick to itself more than to another material.  This was the case here but the intricate details of the original print caused the plaster negative and metal positive to be locked together.  I used an x-acto knife around the seam to pry them apart.  This did cause some cracking and damage to the plaster print but I was able to get the two separated.

Once separated the two are able to fit together again and be removed again with ease. 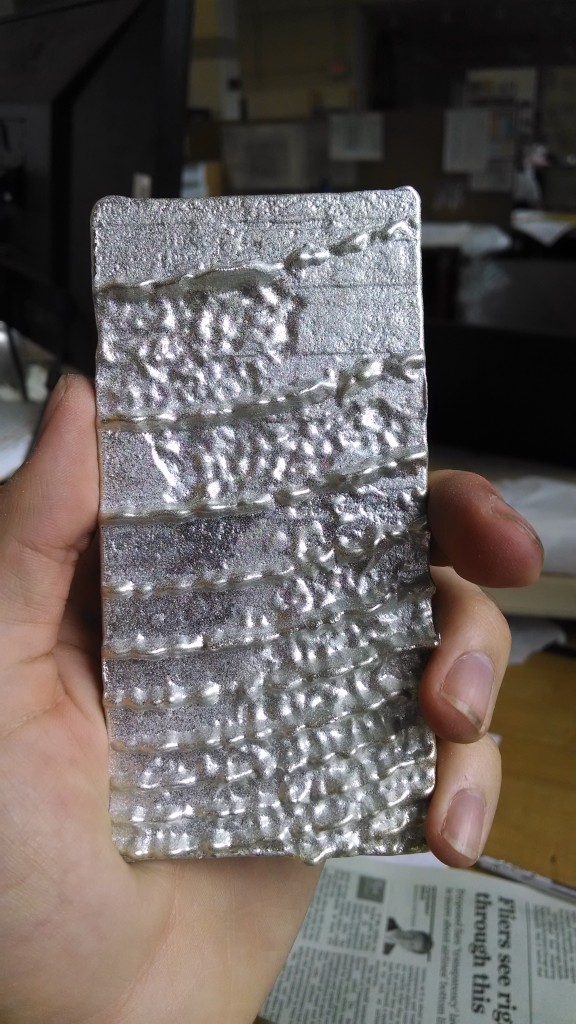 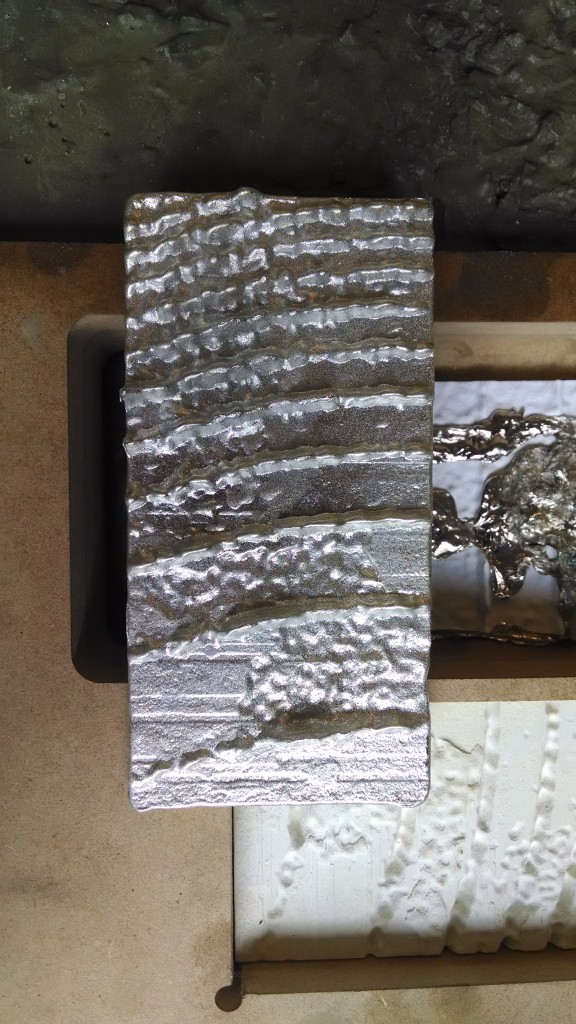 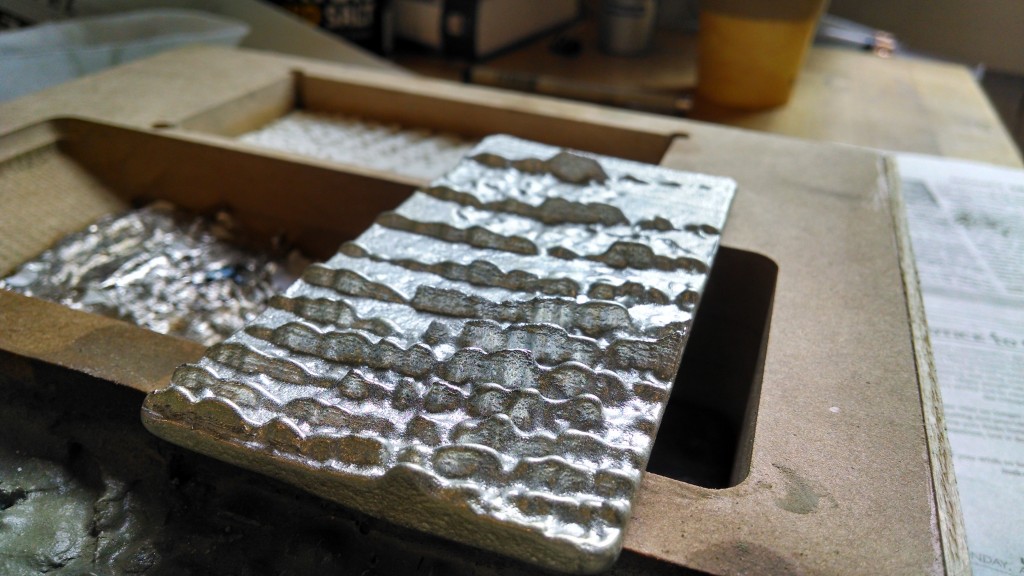